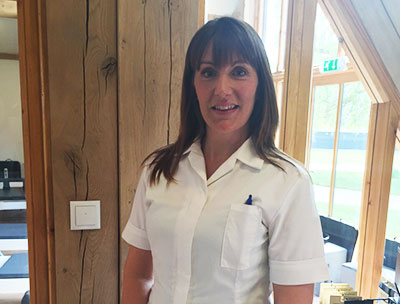 Rachel Wharton graduated from the Welsh Institute of Chiropractic in 2008 following a five year degree programme. She is registered with the General Chiropractic Council (GCC) and is a member of the British Chiropractic Association (BCA) and Royal College of Chiropractors (RCC).

With over 10 years’ hands on experience, Rachel specialises in the diagnosis, treatment and overall management of conditions that are due to problems with the joints, ligaments, tendons and nerves of the body, particularly those of the spine. Rachel has worked mainly in private practice but also worked part time within a GP-based clinic for the provision of Chiropractic treatment under the NHS for 2 years.

Rachel is fully qualified in Diversified Chiropractic, a highly specific manipulative technique. She has trained further in Sacro-Occipital Technique (SOT) and Medical Acupuncture allowing her to adapt her skill set to suit her patients’ needs.

Rachel has a natural ability to put her patients at ease with her main focus on overall health and wellbeing. Rachel always strives to expand her Chiropractic skills and learning, regularly attending seminars and courses to maximise her knowledge and expertise. Her passion is pre and post-natal Chiropractic care.

Rachel has experienced life in the fast lane at Le Mans 24-hour race on two occasions. Here she supported a race team including 3 drivers and their mechanics with Chiropractic care and nutritional support during race preparation and throughout the 24-hour endurance race.

Rachel in her spare time enjoys spending time with her family. She now has 3 beautiful daughters. Any spare time is used to keep physically and mentally fit including horse riding, Pilates and running as well as keeping her social calendar filled with friends and family. 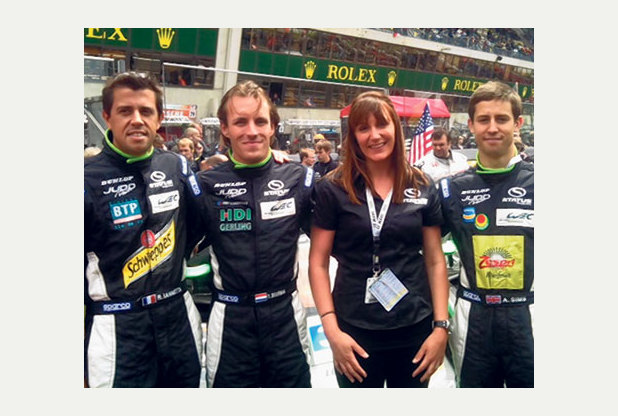 The article below featured in the Herts & Essex Observer in July 2012.

A chiropractor experienced life in the fast lane when she cared for a team competing in the gruelling 24 Hours of Le Mans motor sport race.

Rachel Wharton was responsible for looking after the Status Grand Prix team’s three drivers – Alexander Sims, of Great Britain, Frenchman Romain Iannetta and Yelmer Buurman, of the Netherlands – as well as the mechanics and pit stop crew before and during the endurance challenge to keep them in peak condition.

She explained: “Drivers are subject to high levels of G-force during rapid acceleration and deacceleration, coupled with lack of sleep, and [in] a 24-hour endurance race the neck, shoulder muscles and forearms are under high duress.

“During the race I co-ordinated the three drivers, including their sleep and eating patterns as well as addressing any aches and pains.”

Typically in a Le Mans three-man team of drivers, one has a two-hour stint in the car, the second sleeps and the third is on standby in the pits in case the car or driver run into trouble.

Rachel said: “Driver one exits the car after their stint, and it was my job to get them out of the pits to the team chalet [to be] showered, fed, treated for any muscle strains or other musculoskeletal concerns with manipulation, soft tissue work and acupuncture. After this they were sent to bed to recharge for their next stint!

“Meanwhile, I would be waking up driver two, going through the same routine and sending them back to the pits ready for their next stint.”

Rachel also administered treatment, exercise and advice to the pit stop crew, who endure repetitive stress and strain to the lower back while lifting 20kg (44lb) tyres, and was responsible for implementing the drivers’ and team’s nutritional needs, making sure optimal levels of energy and concentration were maintained.

In her day job, Rachel treats people with a range of problems with joints, bones and muscles, particularly back and neck pain and minor sports-related injuries.